Years ago I saw a picture of Salisbury Cathedral painted by J.M.W.Turner and when I am not using War of the Worlds wallpaper on my screens I use his painting. It is a pastoral scene and does not in any way reflect what is there now but the building is the same and I have always wanted to go there, to be there. Sometimes the ideal and the real come together in a wonderful way. We had the good fortune to attend evensong during the commemoration of the end of WWI. The Royal Legion was there in full regalia, the bands were good, the choir was lovely, the organ was sublime. The Royal Legion is the equivalent of our American Legion and they are very active helping British servicemen and women while on active duty and in retirement. They help children, the injured, widows, everyone in a service person’s family if needed. The RL has the complete support of the government and it is clear that in England they know exactly why the war was fought and what the true price of their freedom is. 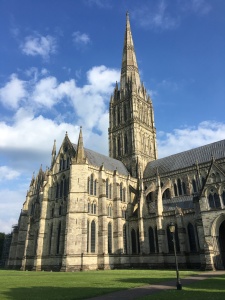 It was a Church of England service which was much like the Episcopal service of my youth and they sang the old hymns. All that aside, I was actually there, sitting in the sanctuary, singing…and we sang God Save the Queen which was so much fun. I would have to use a lot of rather flowery language to convey how I felt in that church. All I will say is that my heart was full.  My only concession to my UUism is that I crossed my fingers during the Apostle’s Creed. Hearing it brought me back to standing next to my mother on Sunday morning as the church was full of voices and it was strangely comforting to hear it again. The building is very old and is built upon still older ruins as many of the big churches are. Apparently it was the cathedral of Ken Follett’s ‘Pillers of the Earth’ and ‘World Without End’.  They have a brochure about it but I didn’t have a chance to get one. I will always remember it.

The doves are for peace and are hanging from a net. They look like the starlings going over our property in the autumn, a few above, then many, then a few. On the walls of the cathedral are plaques commemorating dead parishioners and we have them in our church, as well. And seeing them there always makes me wonder if we will have to remove one in a hundred years or so to put up another plaque with the names of our ministers on it. I look at the walls of our little church and rearrange plaques, adding and subtracting as the mood strikes. I haven’t seen any plaques in Salisbury Cathedral that are newer than a hundred years ago. 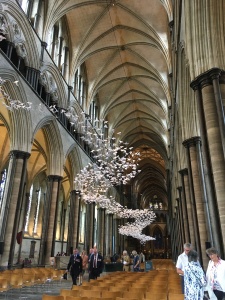 Now a word about the roads in England. Perhaps they are not the same all over but so far ….they have roads here that are so narrow it is actually easy to sideswipe the fences on the side of the road, or parked cars or the many mad bicyclists who seem unaware that the cars coming from both directions are going to have to pass. In New England the speed on a country road seldom is higher than 45mph. The same road here has a limit of 60mph. No, I’m not making this up! Curves in the road that  would fling someone into orbit mearly ask one to slow.  We encountered a 14% grade with a 30mph zone directly at the bottom of the hill. And the most terrifying of all is a sign that reads, “Oncoming Vehicles May Be in the Middle of the Road” and another that reads, “Arched Bridge High Vehicles Use Middle of the Road”. Unfortunately there was no way we could stop on the road so I could photograph that sign! I think the most surprising thing is that we have not encountered any traffic accidents. On the other hand, there is a fine of 1000 pounds for texting while driving and a zero tolerance policy on alcohol….not one drink may be had before driving. 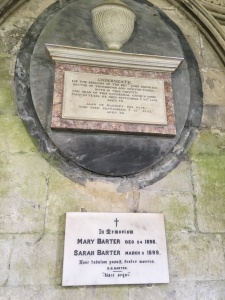 In the US one can often pull off a country road onto the verge which is almost always wide enough to pull off entirely. This makes it possible to let traffic get ahead of a slow moving car (us) and also lets people pull off to admire the view. With the narrow roads and no verge at all this is not possible. Another big difference is that there is no clutter, no advertising signs, no strip malls, services are rare outside of the towns and the towns do not sprawl. There is countryside and then there is the town and the speed drops from 50 or 60 to 30 in a few hundred feet but nothing can be seen ahead but the sign. And now I am wondering: how much land do we use in the US  for verges? How many hundreds of thousands of acres rubbled over with gravel for the sole purpose of housing stopped cars?  England does not have the the land to use that way on every road and lane and in this ancient country there is a road going everywhere.

Now, remember that here folks drive on the left side of the road, and Eric is doing all the driving, and I am doing all the gasping in horror. Our first foray out was a terrifying affair.  The tendency is to drive too far to the left in an effort to avoid the oncoming traffic which to us looks like it is on the wrong side of the road and is going to bash us head-on. I was continually saying, “Too far left” and Eric saying, “Thank you”.  He said not one sarcastic rejoinder because he was as grateful as I not to crash into stone walls. My hero. Did I mention that the roads twist like pretzels?

We returned to our room….a FROG (finished room over the garage) which is very nice. It is part of a small, gated estate that is immaculate in every way. We ate a very sparse dinner and fell into bed. And the next day we were up and out one our way to…..