Yesterday we drove over to Stonehenge to see if it is still standing and I am glad to report that a good deal of it still is. Over the last several millinia some of the stones have fallen, some have been removed by builders of the past and that is not considering the remodeling that our ancient ancestors did on the henge. The additions and subtractions were discovered by archologists and they made the best guess as to when and how….but not why. The stones do line up very nicely with the solstices and equinoxes and the area in total is quite the astronomical clock but was it religious; or for burial, or just a lark? We spoke at length with a guide who was lounging around waiting for questions and he said that the stones do not care why they were built and people can project upon them whatever they wish. There are nurmerous burial mounds, over a hundred in that area, and the guide was told that stone henges are for the dead and wooden ones are for the living and there is a wooden one, Woodhenge, not too far away, that they have markers showing where the wooden posts, thirty inches in diameter, were placed. How can they know what took place five thousand years ago? Because under the soil is chalk, the same that makes the white cliffs of Dover and once it is scarred it does not heal, the scars remain. 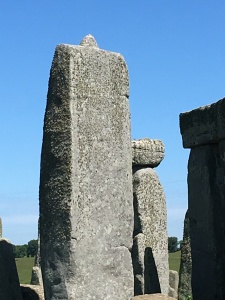 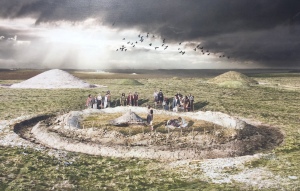 (Notice that on the single stone at top left there is a projection: this shows the mortise and tenon construction of the circle. The stone behind it still has its capstone. Directly above is a possible scene of building the ring, they have found animal bones there. To the left is another fanciful painting based upon archeological evidence.)

Lichen grows all over the stones, seventeen species in all, and some have gotten there by spores blowing across the oceans. Cool, huh? Some patches on the stones are devoid of lichen and that is because they scrubbed off graffiti. These days they are using biological methods, the guide didn’t know just what, to get the marks off. If you have ever wondered why people are not allowed at random into the stone ring it is because even with every caution and admonition people still sneak beyond the guides and write on or chip away at the stones.  Tim told us that at one solstice a man in a hooded robe went aronud and put a bit of oil on every stone. It was dark and they didn’t see what he was doing. The stones looked like a dog had peed on them for months until the natural weathering of the oil. Lots of crappy things have been done in the name of religion but this is just venal. People are allowed up there with guides after hours, limited availability. Now that I have seen it I wish no one was ever allowed up there. The viewing areas go all the way around and are plenty close enough.

The Stonehenge World Heritage organization own over 700 hectares around the stones encompassing the stones, the burial mounds and the Stonehenge Cursus, a 1.9 mile long 450 foot wide design etched into the earth. Two  artificial pits have been found near the east and west ends of the Cursus. It has been found that lines of sunrise and sunset at midsummer through these pits are aligned with Stonehenge. It is interesting to note that the sun at the summer solstice shines through one aperature and the sun sets at the exact opposite at the winter solstice. This is the ancient way of determining the exact dates, sunrise in summer, sunset in winter.

Here is a picture of some mortal, short-lived hominids. Some of our ancestors built Stonehenge and we are very proud of them and proud to be a part, however brief, of the human family.

I am an organic gardener with thirty years experience, a former minister, a former home-schooler, (they grew up), a current clarinet and flute player, knitter and spinner, and swimmer. I am interested in food security issues, food and policy issues, food preservation and encouraging people to become more aware and pro-active about their own food supply. I teach home food preservation, especially water bath and pressure canning, beginning organic gardening using bio-intensive methods, and give talks on food and food security for groups.
View all posts by Clio →
This entry was posted in Uncategorized. Bookmark the permalink.