50th..Death and Destruction and Royalty at Caernarvon

Our hostess in Bala, Wales has the fabulous job of helping farmers in the surrounding counties develop value added products to enhance their incomes and retain their farms and their way of life. You can imagine how happy we were to hear this. They have one product, Welsh butter, that could sweep the world if they chose to market it. The Irish have Kerrygold and this is better. Things close in the late afternoon, except for restaurants that serve dinners…and pubs. All other shops and many restaurants are closed by six. This has two advantages, first the people who work in the shops get to go home and have a life and the second is that it is quiet in the evening. There is almost no traffic on the streets. In addition, they have signs up in places informing people there is to be no rowdiness, no public noise, no bad behavior, really nothing obnoxious and the it is the listeners, not the perpetrators, who get to decide if something is untoward.

We went to Caernarvon where there is a huge castle where Prince Charles was invested , the last in a very long line of princes who were invested there. In 1969 he knelt in that castle and with his mother’s hands around his promised to be her liege man, then she gave him the kiss of fealty and gave him an ermine robe, a scepter and a ring and he was the Prince of Wales. We might not think too much about this but they sure do here in Wales. The English have been trying to dominate the Welsh for a more than a thousand years but the country side makes it a bit difficult. That Elizabeth II is the head of this country is simply graciousness on their part, I think if they wanted to engage in guerilla warfare they could make it plenty difficult. But that’s just it, they are too well mannered! The picture of the chessboard looking room is actually showing the Princes of Wales, the larger they are the more power they had. The gentleman in the top hat is watching the castle burning, it burned or was destroyed by war numerous times. It was restored by some very rich man in the 1800s. 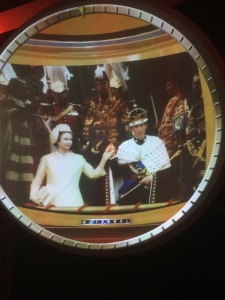 The castle has a museum of the Welsh

Royal Fusilliers which I think are the equivalent of our special forces and they are clearly tough. These men have fought in every war England has fought it. The people from the British Isles are, as I have stated before, in no doubt that their freedom was dearly won. Here is a picture of a chart The Royal Fusillers had in their museum. (Eric is standing where Prince Charles was invested in 1969). 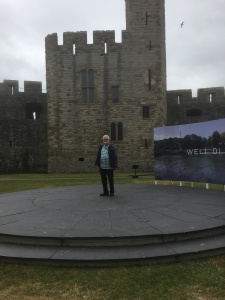 The thing is, living in Caernarvon would have been quite unpleasant and cold. It is right on the water and made of stone…huge stones with walls fifteen feet thick and with passages in the center of the wall to get to the fighting areas. Just about everyone wanted to attack this castle and I am wondering if maybe they shouldn’t have built it at all because it attracted so much attention. I think that the Roman villa was more technologically advanced, easier to live in and certainly easier to keep warm. But then, it was in the Cotswolds and not on the edge of an estuary heading to the Atlantic Ocean. The river next to the castle is subject to tides. The sail boats have fins for rudders that keep them upright during low tide. Here is a picture of that. 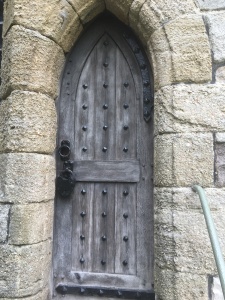 We drove through part of the Snowdonia National Park. It is rugged, it is big, it is steep, it is cold and it has a clouds on top of the mountains. We drove in the usual way through the river valley and many times we were perched right out there where only God and birds could see us. People actually live on those steep banks and their driveways come from the road we were on, they have narrow bridges fording the river and steep driveways and somehow they live through this. Remember the speed limits are really high…sixty on the road we were on…except when they wanted us to slow for a curve. We never went that fast. We always hunt for the turnouts  so we car pull over and let the traffic pass us. I tried several times to photograph the mountain but I couldn’t get enough of it into the frame to make any sense of it. So I photographed a bit of one of the streams coming off the sides of the mountain.

Coming back from Caernarvon we drove oven a high mountain, 1700 feet at one point, and for miles at the top it was a plateau. Not flat but lots of meadows and sheep folds. We were inside the cloud the entire way and the view might have been spectacular but we could see nothing, the visibility was practically nil and Eric said he was only going to drive what he could see..very sensible. The thing is, the sheep are all around there and we realized that the fences we had seen containing them down hill were not here! Sheep were feeding on the sides of the road. White sheep are the same color as the cloud and we had a few short moments as they dashed across in front of the car. We had to recognize faintly darker patches of cloud to know that we were to be attacked by fluffy leapers. We needed to stay awake so we didn’t count them. 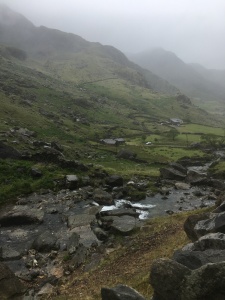 Leaving Bala we drove through a valley, no more than a thousand feet up and the views were lovely. The road was mostly wide and easy to drive and at no time did I think we were driving off into space. This countryside, like the Cotswolds is relentlessly beautiful. It is impossible to photograph and do it justice so I am sticking to things that might be more interesting than gushing equally relentlessly about the scenery. And we are on our way to….