Whan that Aprille with his shoures soote,
The droghte of March hath perced to the roote,
And bathed every veyne in swich licóur
Of which vertú engendred is the flour;

Our pilgramage to Canterbury to pause and reflect where Thomas Becket was murdered began as we sat in a punt with other pilgrims and journeyed into the city. Some of the pilgrims were from Spain and one very beautiful lady was from Nepal, Kathmandu to be precise, and we, as you know, journeyed over the water from the lands to the far west. We were a  motley crew in the truest sense of the phrase. 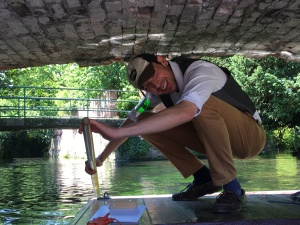 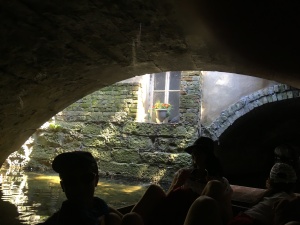 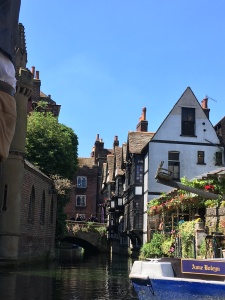 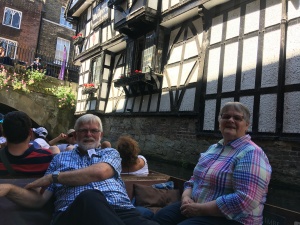 Our guide punted us along one of the canals of the Stour river. The bridges along the canal are very low and we had to keep our heads down.  One of the bridges had an indigenous population of hay spiders which, we were told, we were not to disturb.  Another pilgrimage led us to an ancient breed of Roman snails which were told not to put in our pockets to eat later…as if we would eat those hay 🕷 spiders! The very idea!

We visited a memorial to a pilgrimage that took place in 1389 or so. I don’t know why their tales are any better than ours but that’s history for you. We had to pay a penny to go in and I’ll tell you, I was saving that penny for a big mug of ale and a beef pie for my dinner. But it was worth it to see those pilgrims of yore and hear their tales…that old dame had five husbands (not all at once) and she choose the last one because she admired his thighs as he carried her forth deceased husband’s casket! Now that’s a women…keeping her priorities straight. That’s her telling her tale and below her are some of the other characters who told tales.

We finally made it to Canterbury cathedral and you would be surprised at the terrible shape it is in! There were stone masons and painters and sculptures working all over the place. I mean, I’d say it isn’t even all that old but in truth, they have been building and rebuilding that church for a thousand years so I shouldn’t be too put out that we couldn’t see the ceiling of the nave. They put a wooden ceiling up there because thay had to take the lead roof off, melt it down, recast it and put it back up.  If there is a hole water will find it….I use straw and daub on my roof and it doesn’t work any where near as well as lead. They have carved new statues to replace some that are weather worn and that stained glass! It’s beautiful but it takes a lot of care. It’s a good thing that the lottery the Queen has going puts coin into it. Imagine, gambling to repair a church! It fairly makes my head swim. The people must be grateful because there are new statues of the Queen and her consort on the front of the cathedral. 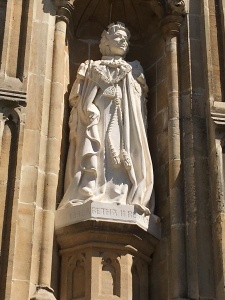 An interesting thing about this church is that is is not level. The ground rises toward the quire and there are steps leading up in several places. When we visited the crypt we were surprised to see windows it was that high. Instead of digging all that ground away they just adapted the building to fit.

But they have to keep the place up for us pilgrims so we can visit the place Becket was offed by King Edward II. He made Becket Archbishop because he thought that he could control the church better but Becket began to become the role and they differed on who got to do what. After Becket’s death Edward want on a pilgrimage of his own and walked two miles barefoot in the snow to show his contrition. He didn’t mean to have him killed and tried to call the men back when he found out what they intended. He was very sorry because Becket was his closest friend. We visited the exact place Becket was murdered and I’ll tell you, it gives one the chills what with those swords on the wall behind! And that doggone Henry VIII! He destroyed Beckets tomb. But folks have the last laugh, there is a always candle burning in the exact spot of his tomb. 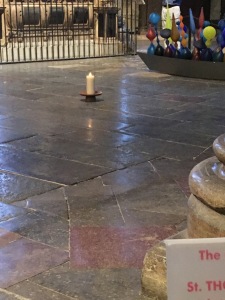 Like so many places of worship, Canterbury Cathedral was sacked by King Henry VIII. Beckets tomb was destroyed and his body was taken and no one knows where. By the way, the only reason York Minster was not sacked is because King Henry died while his men were on their way to York and they turned back. I imagine that many of the men really did not want to desecrate places they had worshiped in all their lives.

I hadn’t considered it before but right from the start of this journey, Eric and I have been on a pilgrimage. We both love British humor and television series. We were young watching Peter Cook, Dudley Moore, Monty Python, the James Bonds and so many more. I have read Chaucer, the English poets, authors, and the rich history. When we were in Bala, Wales our hostess, Llio, told me that my family, the Edwards’, are from that area and that there are many families with that name still there. So, yes, a pilgrimage. And more to come as tomorrow we journey to….